Last week, Dan and I decided to have a little mid-week date night at a place downtown. Since I work downtown, and he often works near our home Metro station, it’s not difficult for us to meet downtown in the evenings sometimes, though we rarely do it. I’d only ever tried Momofuku once, when they first opened in D.C., and it was for lunch without Dan, so I thought that might be a fun place to try again (for me).

Momofuku is a series of restaurants founded by chef David Chang, who was originally a Northern Virginia native, but moved to New York City to found his first restaurant, Momofuku Noodle Bar. He eventually teamed up with pastry chef Christina Tosi to found the sister establishment, Milk Bar. In 2015, shortly after I started working in DC, they opened a Milk Bar and Momofuku CCDC in Washington, D.C. I had lunch with a friend there in November 2015, but had largely forgotten about it since then, mostly because it was a very difficult place to get into when it first opened. Since then, it seems the business has calmed down to more reasonable levels, and I was easily able to get us a dinner reservation for Wednesday when I was looking the weekend before. 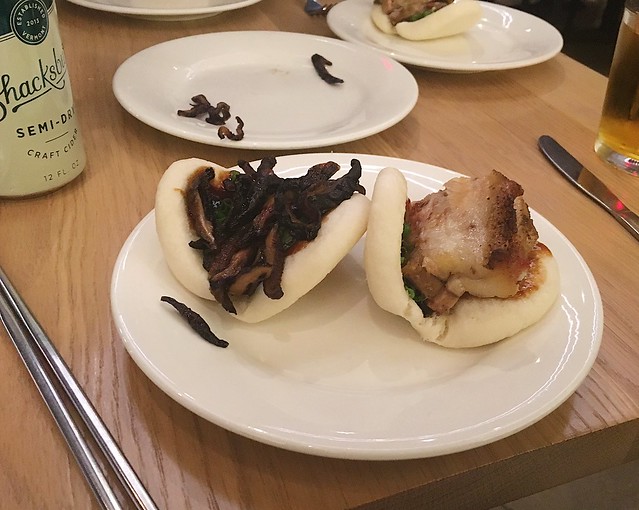 One of the reasons I wanted to go to Momofuku is because one of their most popular appetizers are their steamed buns. Anyone who’s read our “About” page knows that steamed pork buns are one of my favorite foods. So of course we had to start with a selection of buns. We had the crispy shiitake mushroom buns and the pork belly buns, and they were everything I had remembered and hoped for. Dan commented that next time we come back, we should just order all of the buns and only order more food if we’re still hungry. The shiitake mushroom bun was new to me, but the crisp texture of the mushroom paired so well with the softness of the steamed bun that I almost preferred it to the pork belly bun. I would almost prefer if the pork belly had been crisped up a bit instead of left soft and melting inside the soft bun. 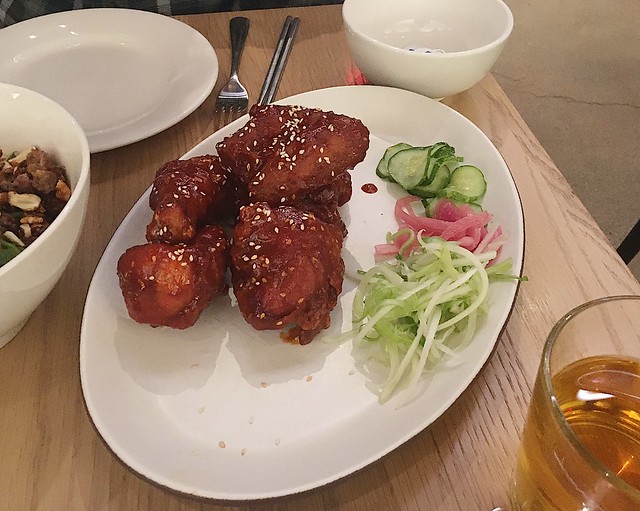 For our entrees, we chose two spicy options, a half order the Korean fried chicken and the spicy cold noodles. As I’m a bit less tolerant of spicy food than Dan, I chatted with the waitress about the spice level and decided that I could probably handle it, but that we could order something else if I really couldn’t eat either dish. They came out and looked amazing. The Korean fried chicken is a half a chicken’s worth of parts (a half breast, a thigh, a wing, and a drumstick), fried crisp, and coated in a spicy sauce based on gochujang chili paste. And it’s very spicy. It was delicious, but just barely too spicy for me. I ate one wing because it was tasty, but left the rest for Dan. I will say that the assortment of pickled vegetables and salad on the side were the perfect way to cut the heat as I ate. 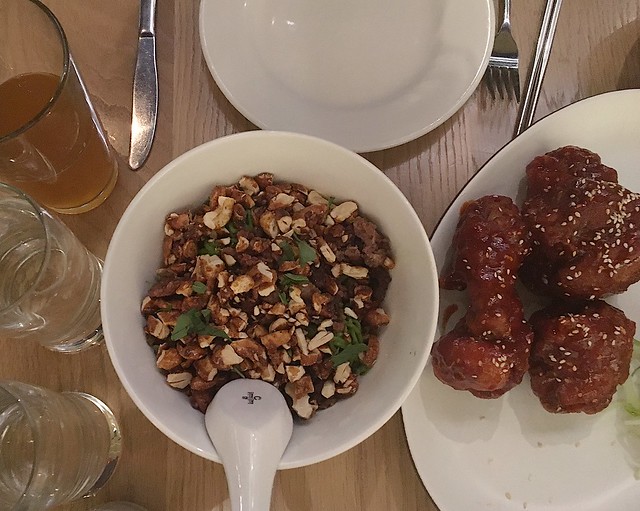 The other dish, the spicy cold noodles, was also spicy, but in a fresher way. The noodles themselves looked like good quality ramen noodles, served cold with a green sauce that tasted like herbs and chiles. It was tossed with sweet candied nuts and cooked Chinese sausage. Though it was also noticeably spicy (even to Dan, who is notoriously hard to impress), I found it cooling enough to eat. I made most of my meal from the noodles, although we did take some of them home for Dan’s lunch the next day. 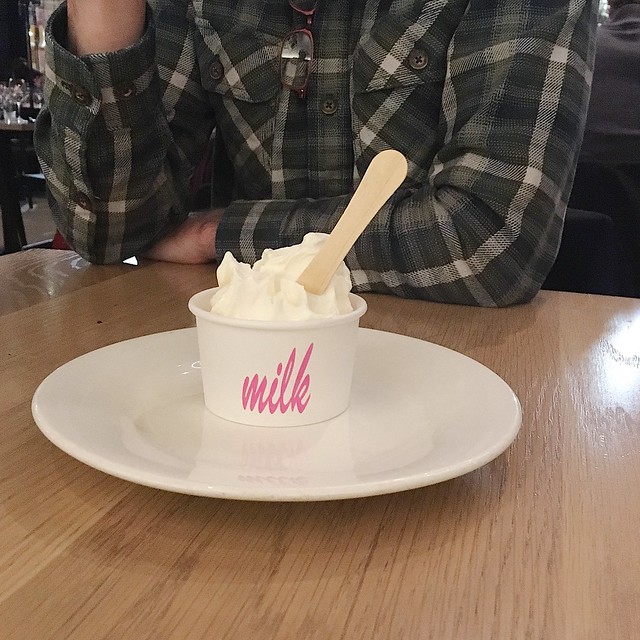 We had to save room for dessert. We decided to try one of the signature items from Milk Bar, the Cereal Milk ice cream. A little cup of soft serve was the perfect ending to the meal, and cut any lingering heat from our mouths. It tastes like the milk at the bottom of a sweetened bowl of corn flakes and comes with two wooden paddle-style spoons, like what came with the ice cream at my dad’s company barbecue each year, to increase the nostalgia factor. While I wouldn’t necessarily choose it over some of the more complicated offerings, it was great to try it.

And with that, we settled our bill (with tax and tip it came to around $110 for two, with one drink for each of us), picked up our leftovers from the hostess (they use an ingenious token system to keep you from leaving it on the table), and headed home. If you’re interested in checking out Momofuku CCDC or Milk Bar, you can find more information on their website: https://ccdc.momofuku.com/